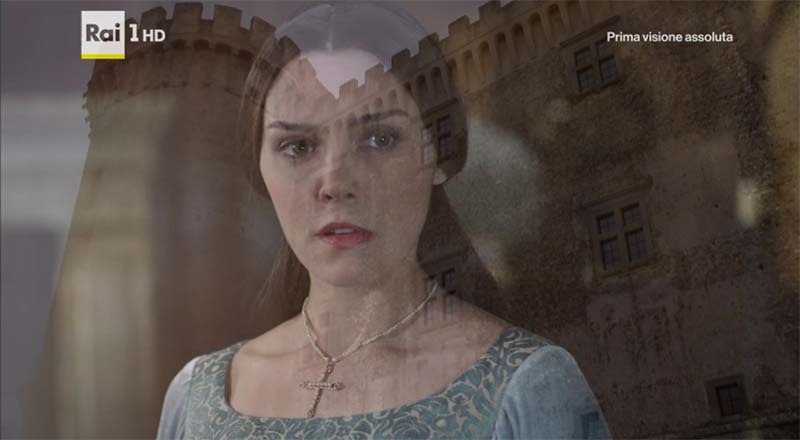 Locations from tv series I Medici Masters of Florence: the Castle of Bracciano

I Medici. Masters of Florence is a tv series about Medici dynasty, which takes place between 1410 (Cardinal Baldassarre Cossa’s election) and 1448 (Lorenzo the Magnificent was coinceived). It’s an anglo-italian project (Lux Vide, Big Light Productions, Rai Fiction) starring Dustin Hoffman as Giovanni di Bicci de’ Medici, Richard Madden as Cosimo de’ Medici, Stuart Martin as Lorenzo de’ Medici (The Elder) and Annabel Scholey as Contessina de’ Bardi. The series was created by Frank Spotnitz and Nicholas Meyer. The eight episodes from the season 1 were directed by Sergio Mimica-Gezzan. While the story takes place, above all, in the late middle ages Florence, the series was filmed in many different locations in Toscany and Northern Lazio (the Region around Rome). You may be surprised to discover that the middle ages Rome wasn’t filmed in Rome, but in Viterbo, a minor city in Lazio, and Tivoli, a town close to the Capital; at the same time the old Florence was filmed in many different places but in Florence. One of the locations the director Sergio Mimica-Gezzan used the most to set a lot of florentine and roman places and palaces is the Castle Orsini Odescalchi in Bracciano.

The Castle of Bracciano and the Hi-Story

The castle was built by Orsini dynasty at the end of Middle Ages (1470–1485), designed by architect Francesco di Giorgio Martini, who drew a high vertical walled fortress, a kind of project that dated back to the previous decades (i.e. Cosimo’s age): after artillery was invented (half of 15th century) the castles became shorter with sloping walls. Inside the castle was finely decorated with frescoes by Antonazzo Romano and Federico and Taddeo Zuccari. Later Baldassarre III Odescalchi restored the castle (1895), with the help of the architect Raffaele; he also made the castle full furnished in 16th and 17th furnitures. Thank to that cares today the castle is a rich museum (open to public) with many furnitures, weapons, armors and arts that dated back to Renaissance. To make the tv series the production had to make just minor changes to the locations.

Castle Bracciano and Medici dynasty in the (real) history

The tv series is not the only connection between Bracciano (and its castle) and the Florentine Family, but stronger links come from the history.

Between 1417 e il 1696 Orsini Family ruled Bracciano, and built the castle (which is now know as Castle Orsini Odescalchi).
1417, about 7 years later, of when Giovanni de’ Medici and his sons helped Cardinal Baldassarre Cossa to become Pontiff. The first link between the Roman and the Florentine family happend about 20 years later than the end of the tv series, when Lorenzo the Magnificent (the son of Piero and Lucrezia Tornabuoni), who was coinceived at the end of S01E08, will marry Clarice Orsini
Piero de’ Medici wanted the marriage to increase the prestige of his family mixing his blood with the blood of the noble Roman family. Clarice gave birth to Piero the Unfortunate, who later married another Orsini, Alfonsina, who will be grandmother to Caterina de’ Medici, the queen of France.
In 1558 Paolo Giordano Orsini, first Duke of Bracciano, married Isabella de’ Medici, daughter of Cosimo I, the first Grand Duke of Toscany, a descendant of Lorenzo the Elder, aka Stuart Martin). In the castle you can see still today the Sala di Isabella, the room where the daughter of Cosimo I lived when she was in Bracciano.

I Medici Masters of Florence in Bracciano’s Castle

The production of I Medici was in Bracciano in  the autumn of 2015, and the filming lasted two weeks: at that time you could have seen walking in the town Dustin Hoffman, Richard Madden, Stuart Martin, Annabel Scholey, Guido Caprino, Alessandro Sperduti, Ken Bones, Lex Shrapnel, Daniel Caltagirone, Valentina Bellè, Miriam Leone, Brian Cox, and many more. That happened because in the castle ware set a large number of the entire tv series locations.

Cossa and the Medici meet at the castle’s entrance stairway: you may see on top of the balustrade a statue depicting a female bear (orsa in italian), that is Orsini’s emblem.

During the first episode’s long lasting flashback you see Giovanni di Bicci de’ Medici (Dustin Hoffman) and its sons Cosimo (Richard Madden) and Lorenzo (Stuart Martin) going to Baldassarre Cossa’s Palace to negotiate their support for the upcoming Conclave (the assembly where new Popes are elected).

The short outdoor sequence, in which the Medici arrive at Cossa’s castle, was set at Santa Severa, but all the other ones were shooted in Castle Orsini Odescalchi in Bracciano. 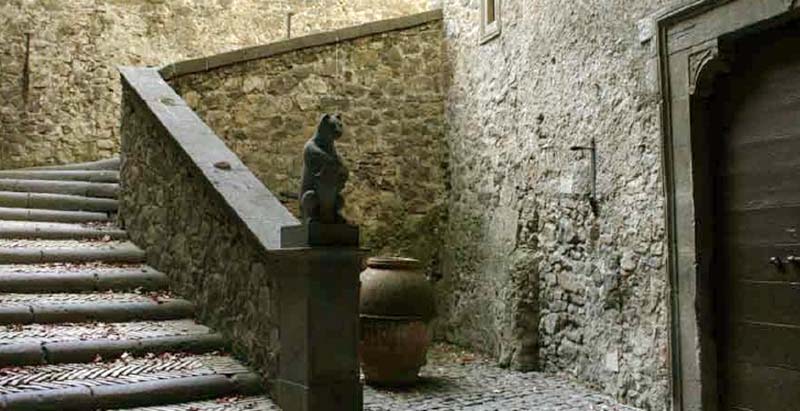 In the Sala della scienza (Science’s hall) was set Cossa’s private apartment, where the Cardinal and the Medici closed the deal. 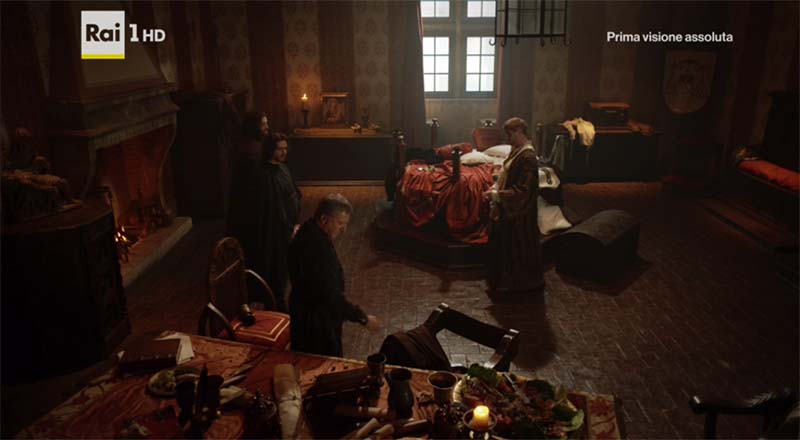 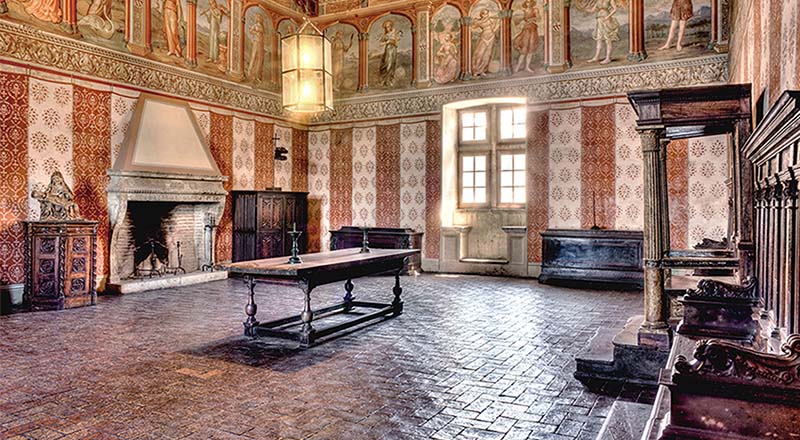 On the way back the three Medici cross again the entrance stairway and go straight to the atrium with the well inside. 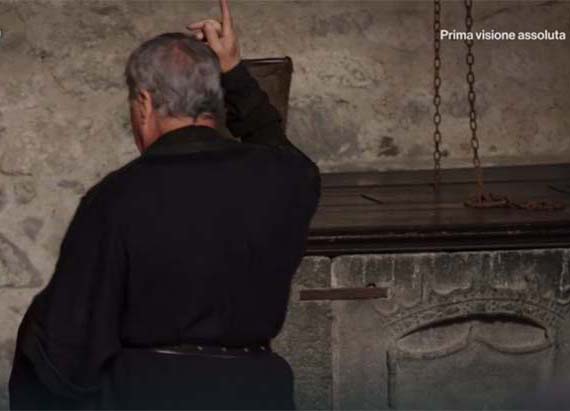 Many location related to Medici’s house were set in Castle Orsini Odescalchi in Bracciano, but only in the flashback sequences: the plot doesn’t mention it, but it’s like Cosimo and Lorenzo changed residence after their father died.

The tv series shows the old house outdoor just once: when the young Lorenzo is late for the family’s assembly, during which Giovanni will burn the son’s cloak. 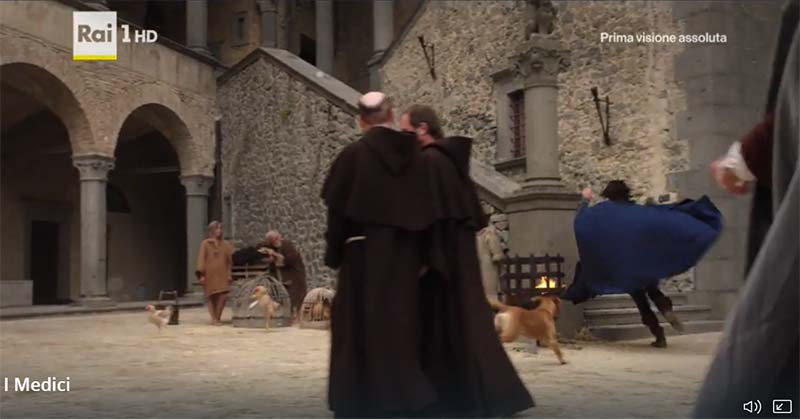 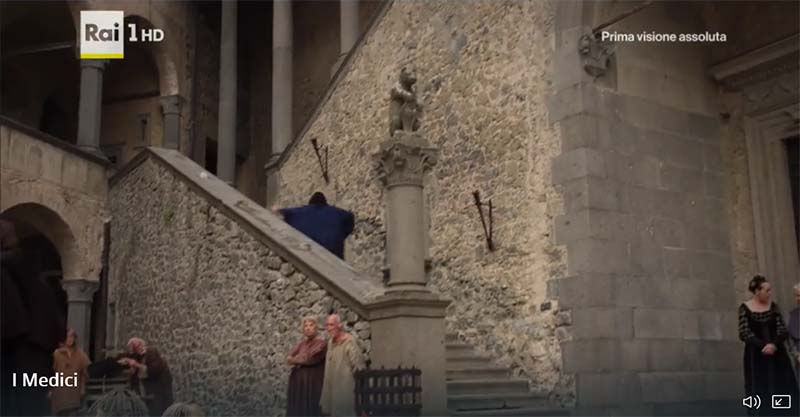 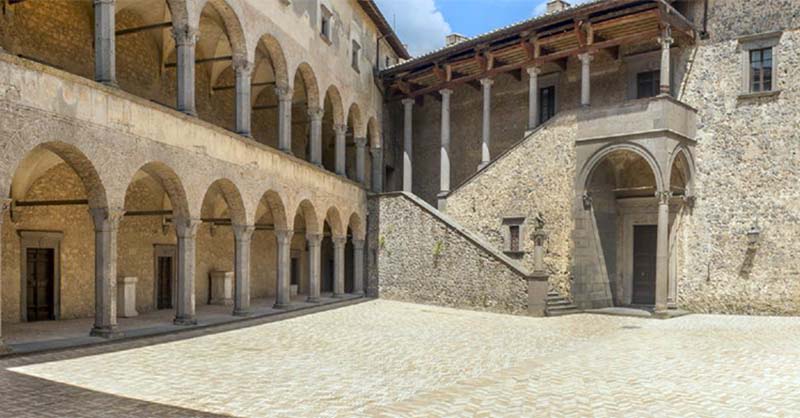 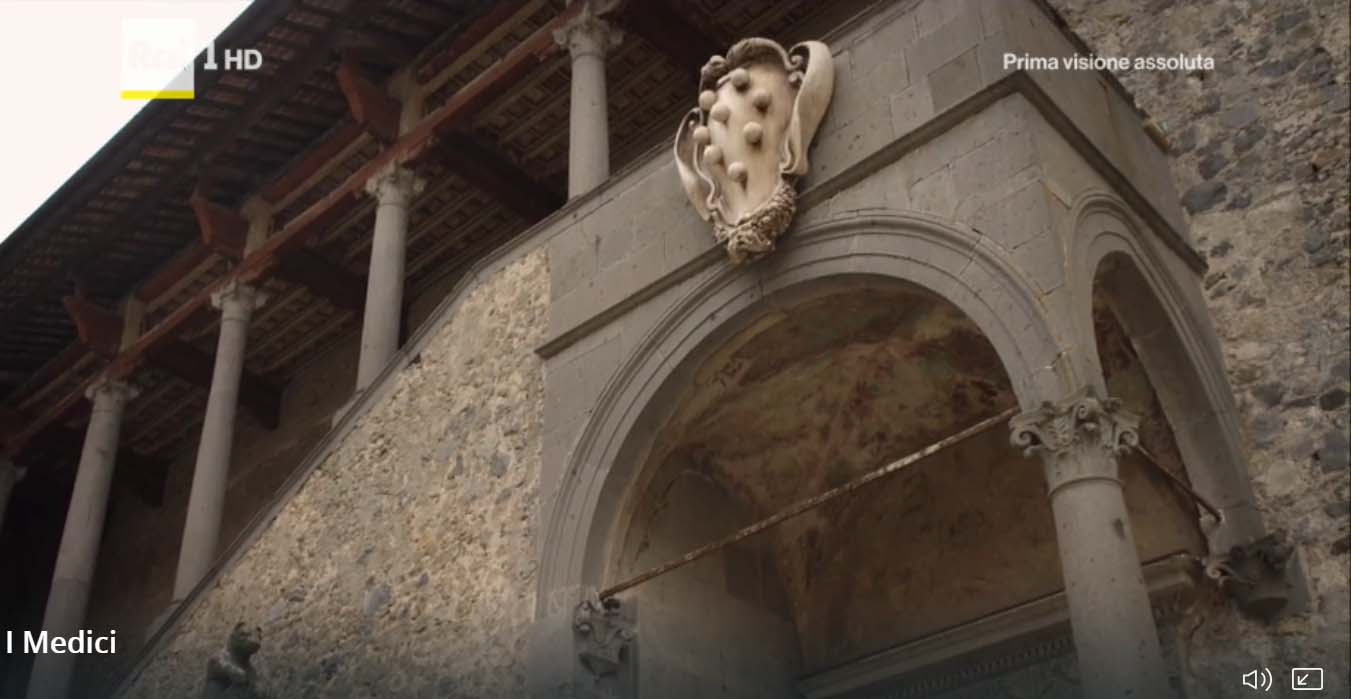 The Medici’s coat of arms you see in the sequence is a fake: the Florentine dynasty never owned the castle, so never placed its symbol in the building: what you see is a prop. Actually even the heraldic design si a fake: that one of Giovanni di Bicci de’ Medici had 9 ball, Cosimo’s 8 (but differently arranged), Piero’s 7 and Lorenzo the Magnificent’s 6.

Sala del Trittico (Hall of the Triptych) takes the name from the triptych that is exhibited inside. The triptyc is formed by two side wooden panels attributed to Antoniazzo Romano (late 15th century) and a central anonymous wooden panel (first half of 16th century). In Sala del Trittico happened a lot of stuff in Medici Masters of Florence. 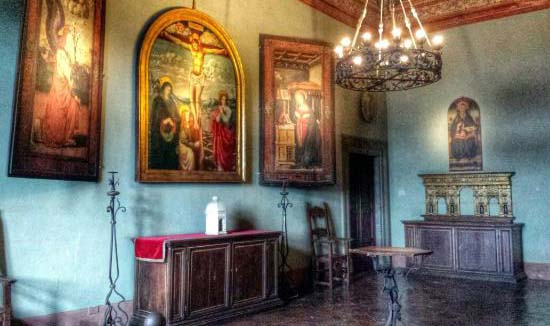 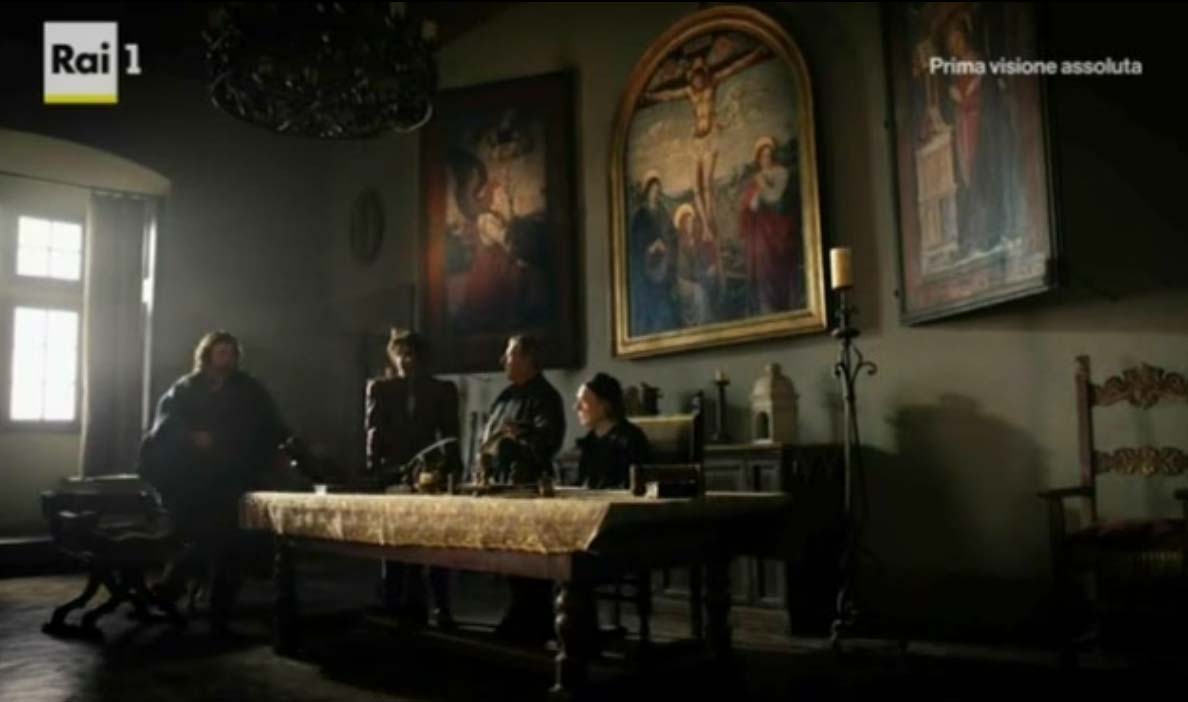 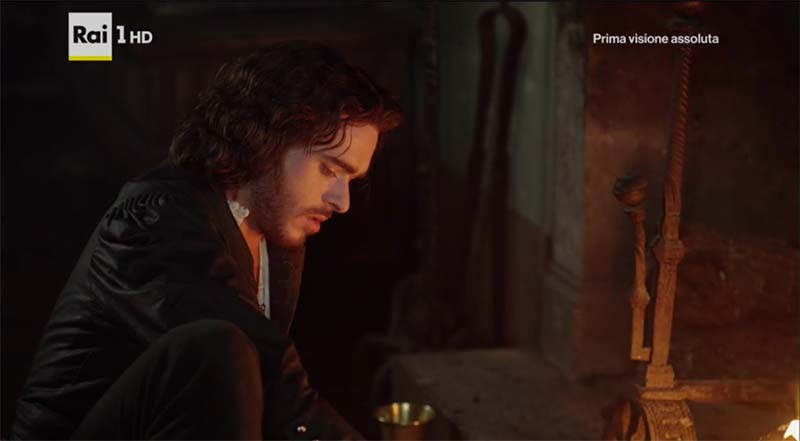 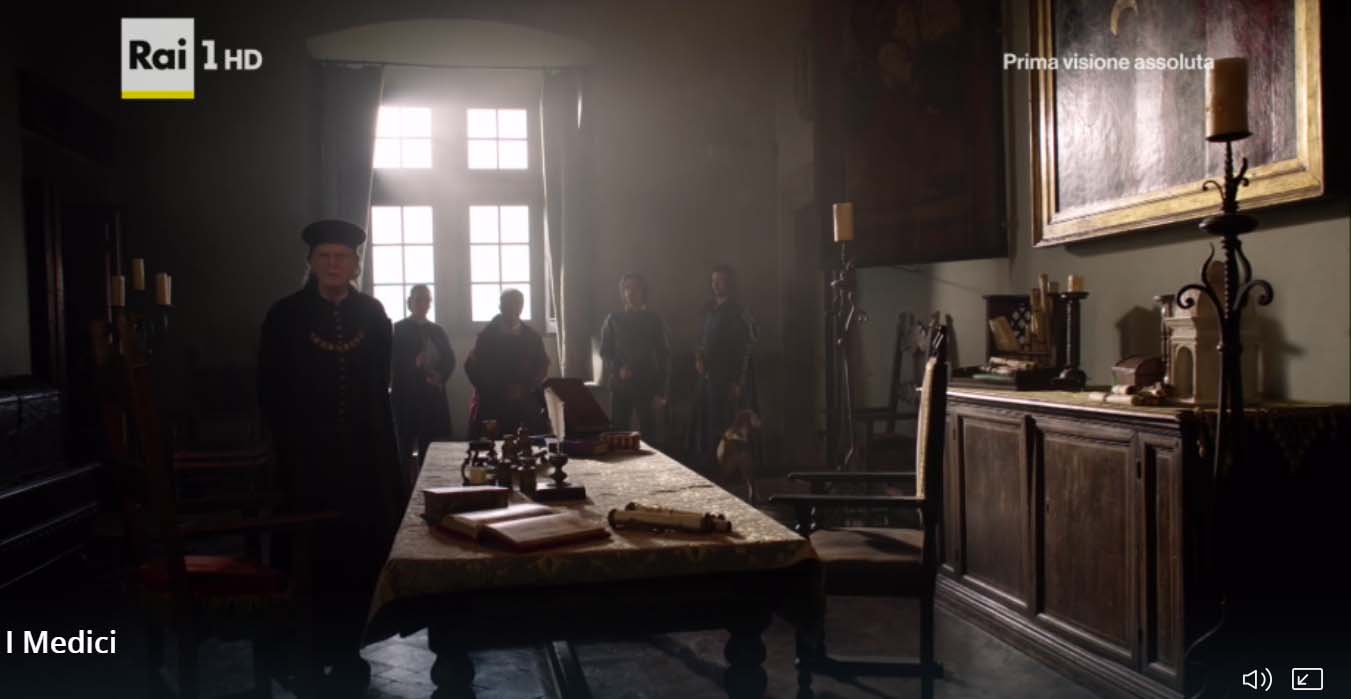 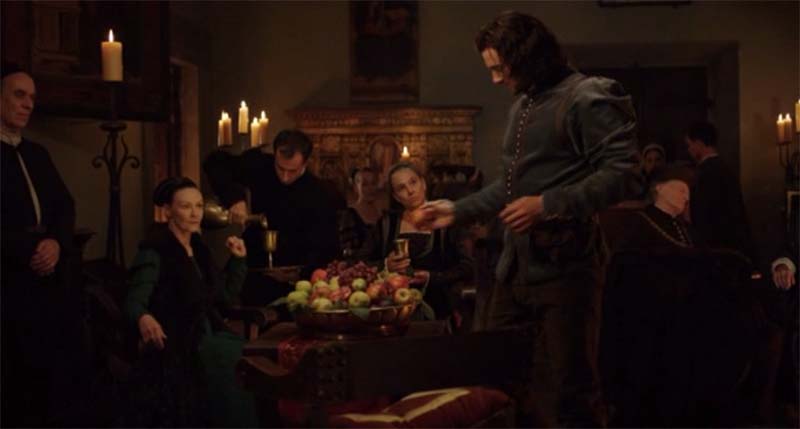 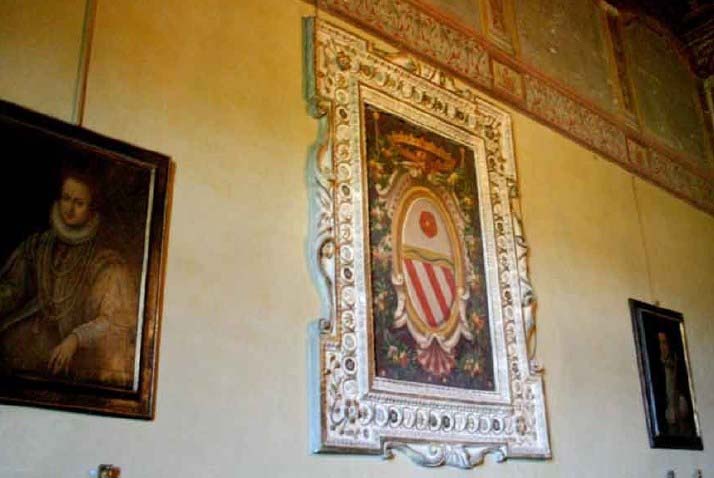 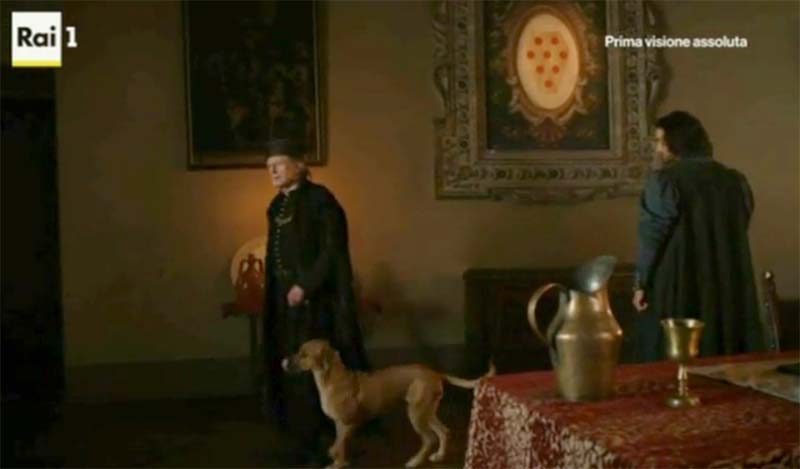 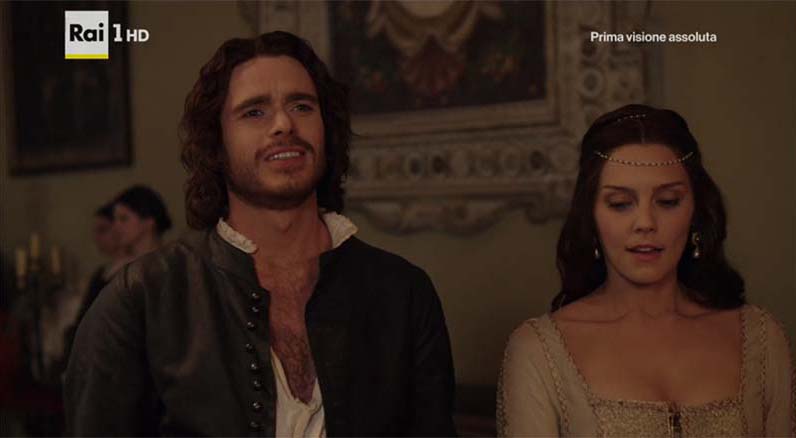 Bank of Medici (1397–1494) was the most important bank in Europe in the 15th century: that made Medici the most rich family in the continent. As told in the tv series, Giovanni di Bicci de’ Medici was the one who founded the company.

In Medici. Masters of Florence the bank was set in a room open on the courtyard, along the side in front of the stairway (behind the left door, in the picture). 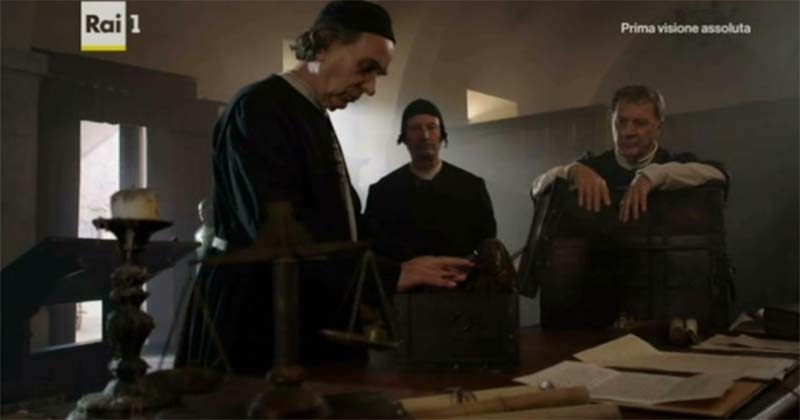 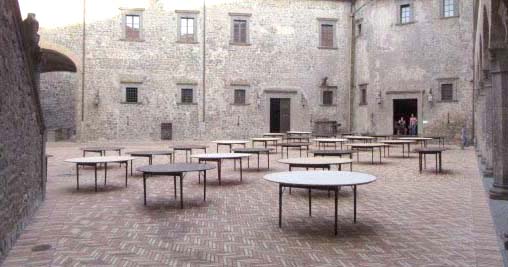 In the last episode (1×08) Lorenzo hunts for the mercenary in the pay of Andrea Pazzi. He starts to seeking informations at Bruno’s, a Florentine inn that is set in the Castle Bracciano’s ancient kitchens. The outdoor walking is set in the castle’s courtyard, along the wall in front of the stairway. 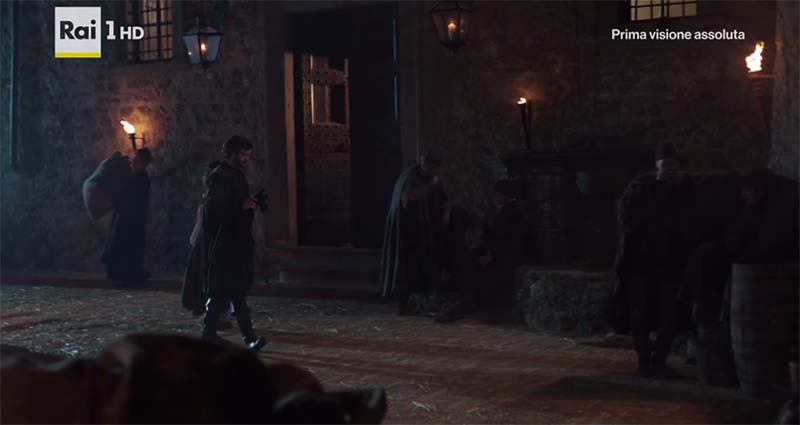 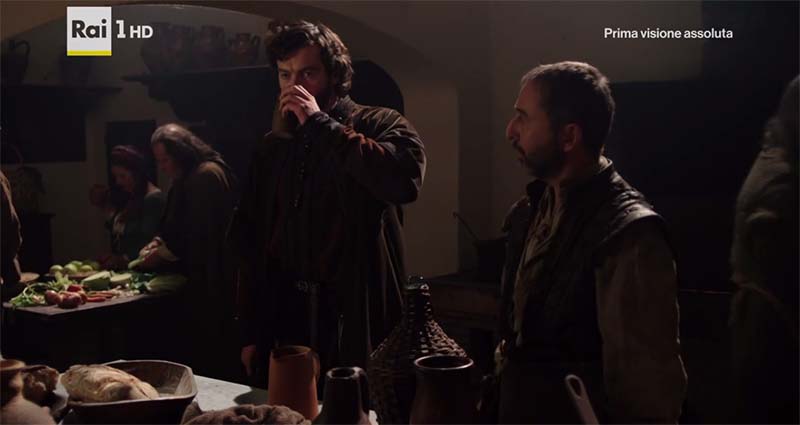 The large Sala dei Cesari (Caesars’ hall) takes the name from the 12 white marble busts representing 12 ancient Roman emperors that are exhibited along the four walls. On the short wall in front of the big chimney there’s the great fresco by Antoniazzo Romano, which represents the deeds of Gentil Virginio Orsini: the ride at the head of the Aragonese army and the meeting with Piero the Unfortunate de’ Medici (sons of Lorenzo the Magnificent).

In Sala dei Cesari was set the festival hall in Pazzi’s House. 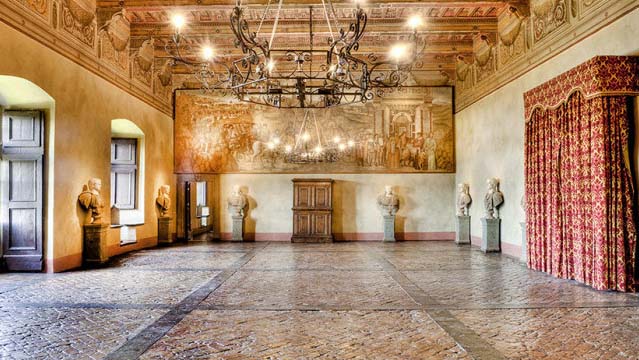 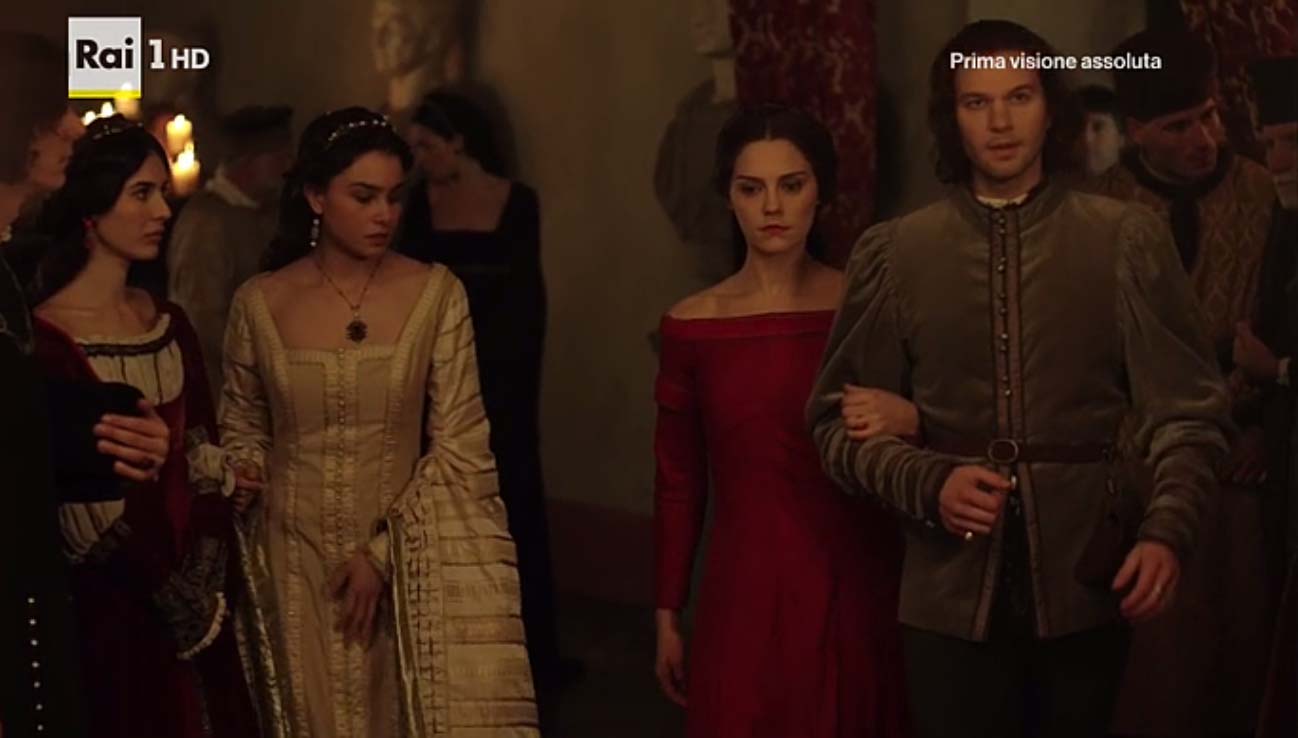 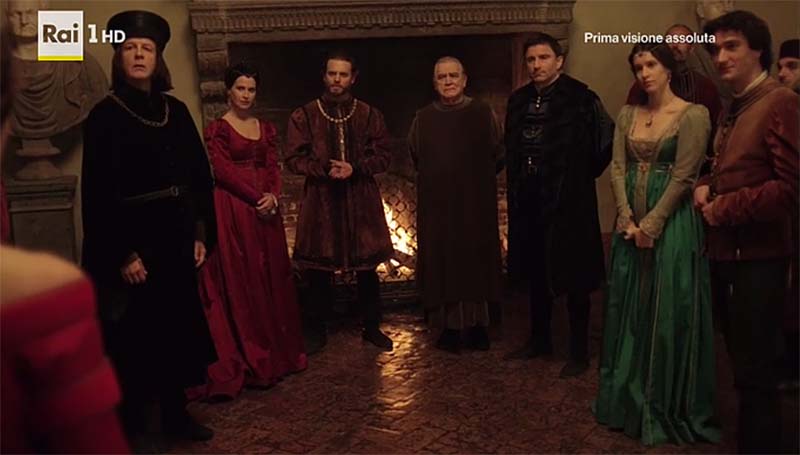 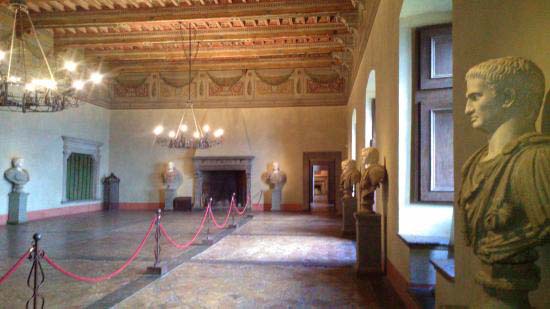 Count Alessandro de’ Bardi (David Bradley) appears in the first two episodes: his importance is closely related to him being the father of Contessina. In the 14th century the Bardi’s was an important family of bankers, but at the age of the tv series they already lost their importance: Giovanni de’ Medici wanted his sons to get marry to Contessina only for the noble title.

In the tv series we see Bardi’s House only once, and only outdoor. The set, obviously, is Castle Bracciano. 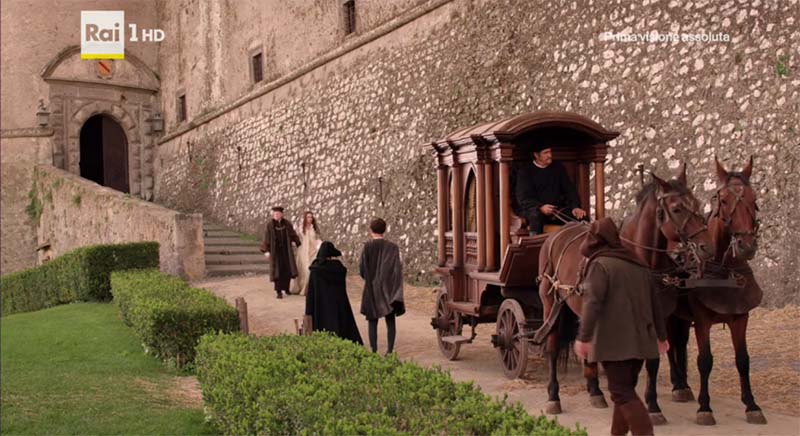 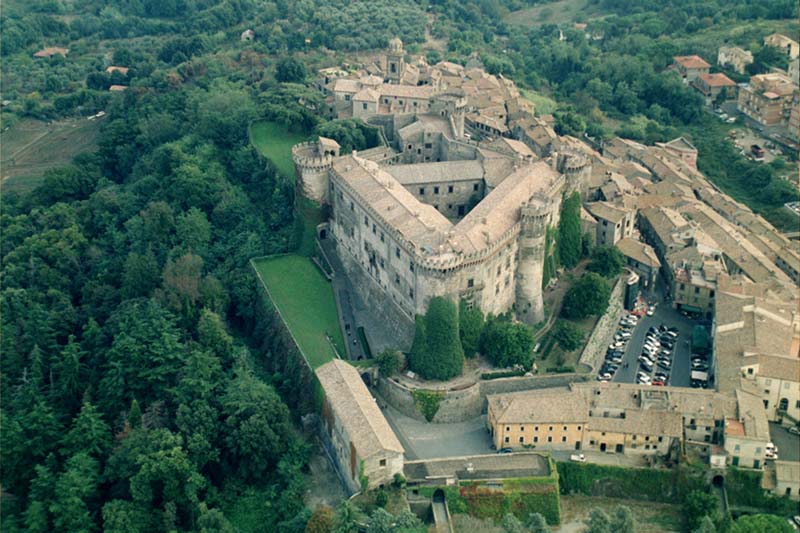 Rome lost almost completely its medieval heritage: in the Medici Masters of Florence the late middle ages Rome was set, above all, in Viterbo, a small city in Northern Lazio: just once, in the Bianca farewell scene, the set was in Castle Bracciano. 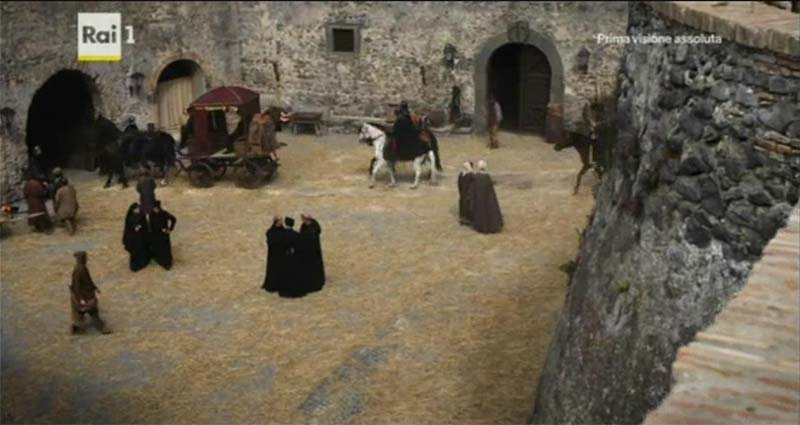 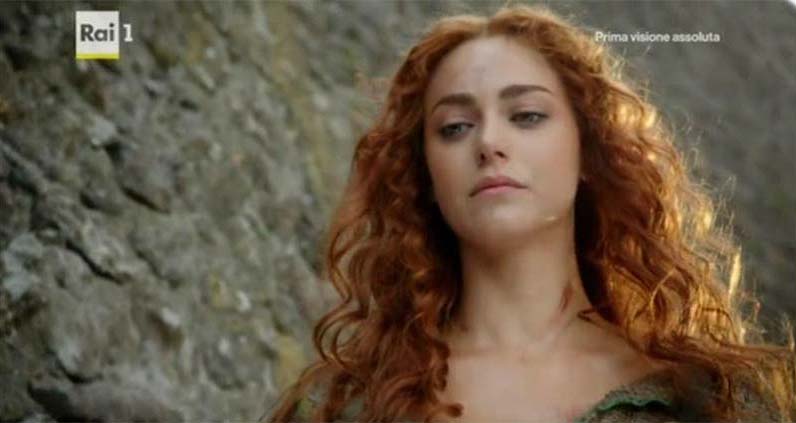 Are you looking forward to visit Medici. Masters of Florence’s locations?

Castle Bracciano is open to visitors, every day but in Monday (learn more).

La Gismonda is perfect to visit Castle Bracciano and many other Medici. Masters of Florence’s location.