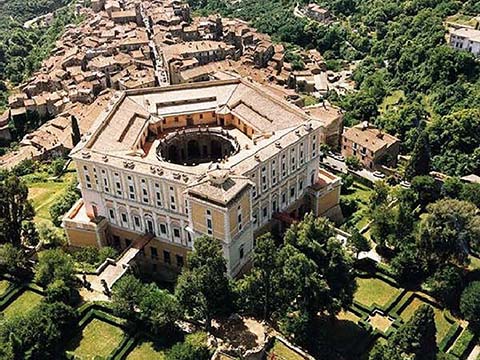 Villa Farnese (or Palazzo Farnese) in Caprarola is one of the main set of Medici tv series.

Caprarola is a small town in the Province of Viterbo, which is situated in a range of volcanic hills known as the Monti Cimini. The settlement dates back to 11th century. Two important feudators owned Caprarola during the Middle Age: the Prefetti di Vico and than the Anguillara. At the beginning of the 16th century the Farneses bought Caprarola and built the so called Villa Farnese.

Villa Farnese stands on a hill at the foot of the Monti Cimini, dominating the village and the surrounding area. The building, which is both fortress, palace, and suburban villa, is the result of the stratification of two distinct phases of construction. Sangallo designed the original building, coinceiving it as a fortress able to withstand the new firearms. Sangallo oversaw the work until 1534, than the construction stopped: it was resumed in 1559, when Vignola changed the original plan into a Villa, and forced changes to the village too. The new architect replaced the angular ramparts (from the original project) with terraces: in this way the fort became a palace. In the center of the residence was built a two story circular courtyard. The helical Scala Regia, one of Vignola’s most original inventions, links the noble floors. Along the rooms on the main floor unfolds an extraordinary wall decoration: in quantity and quality is one of the most important pictorial cycles of the late Mannerism. Two secret gardens lay behinf the building. On the slopes of the hill, a park with terraces, fountains and water features was built to valorise the “Casina del Piacere”, originally a hunting lodge.

The tv series crew was in Caprarola on November 2015, to use Villa Farnese as a set for Medici Masters of Florence.

In Villa Farnese Cosimo, Lorenzo and Cardinal Cossa meet and try to corrupt the others Cardinal, the election of the new Pope takes place, and Lorenzo meets the Pope Martinus V: that makes us to think that Villa Farnese was set as the Vatican (but in Cosimo’s age the Vatican didn’t exist yet).

The Palazzina di Caccia, a Villa Farnese’s depandance, is Tenuta di Montelupo, the country villa where the Medici fled during the plague.

The Sala dei Fasti Farnesiani takes name from the Taddeo Zuccari frescoes which preserves. The 11 pictures narrate the deeds of the Farnese, a family that came from Northern Tuscia and mixed blood with the most important European dynasties.

In the hall takes place two episodes about Cardinal who get corrupted: during the first one Cosimo looks up to the ceiling and see the fresco so called Dominatio or Sovranità temporale: it’s a sign about the oncoming rise to power. 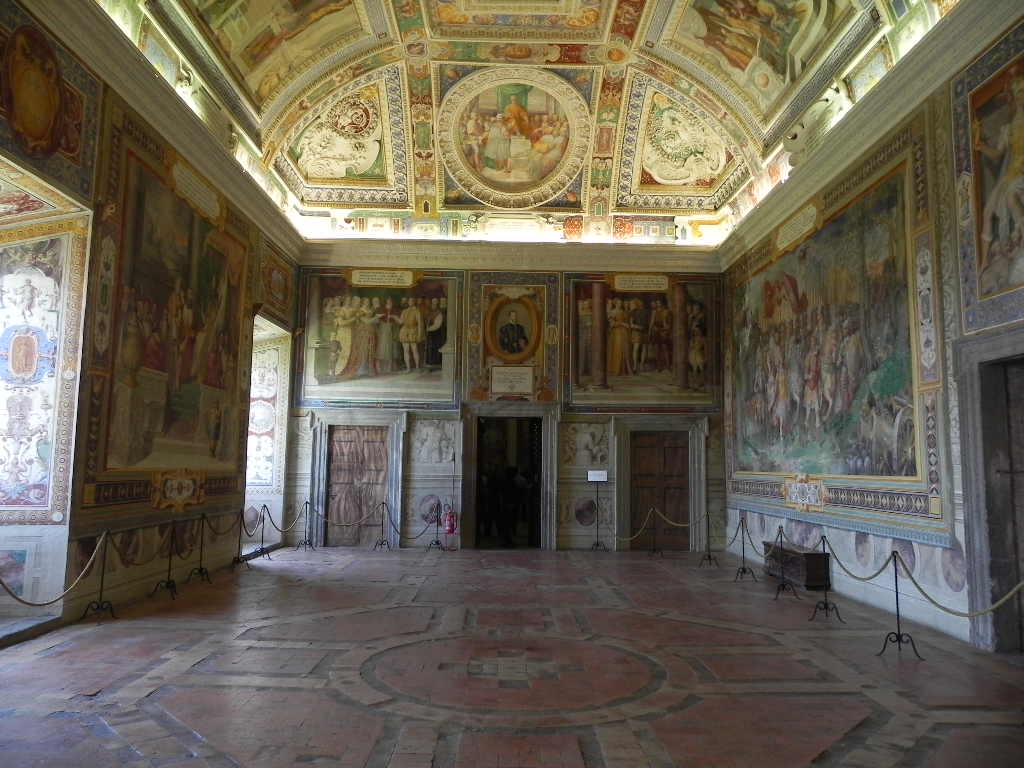 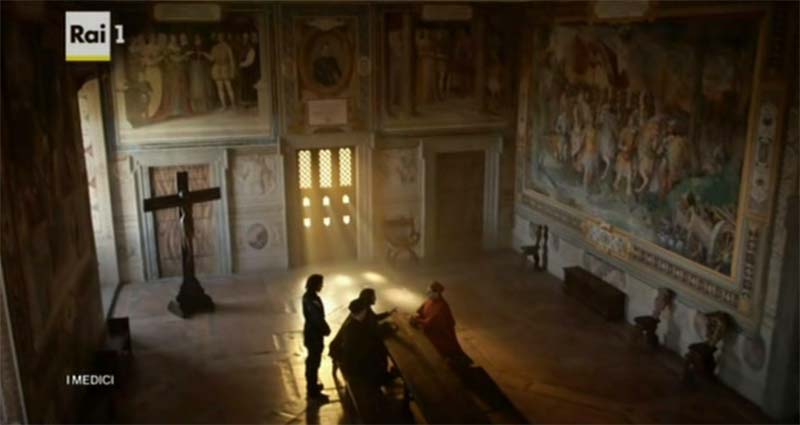 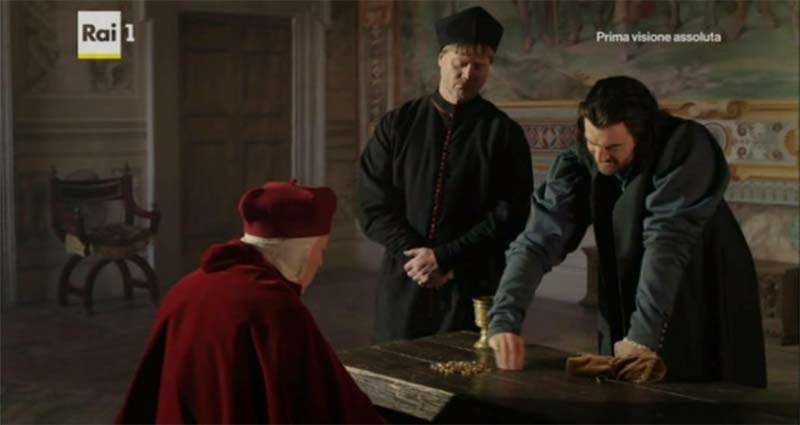 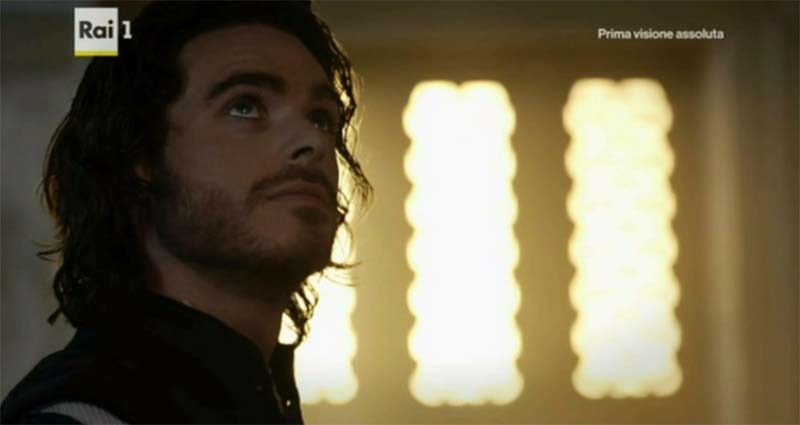 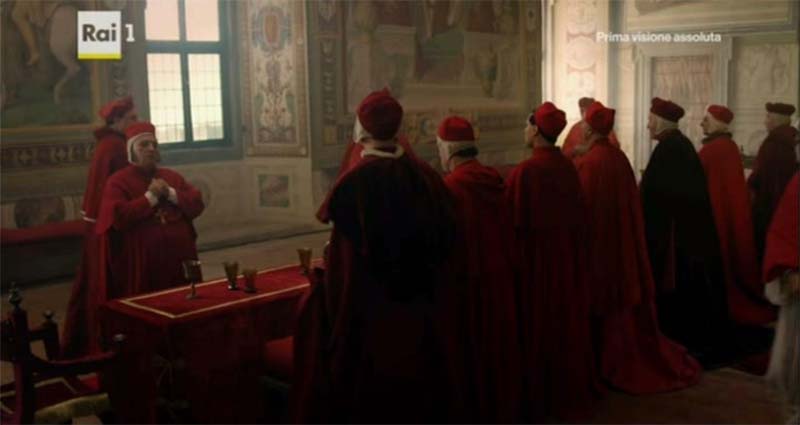 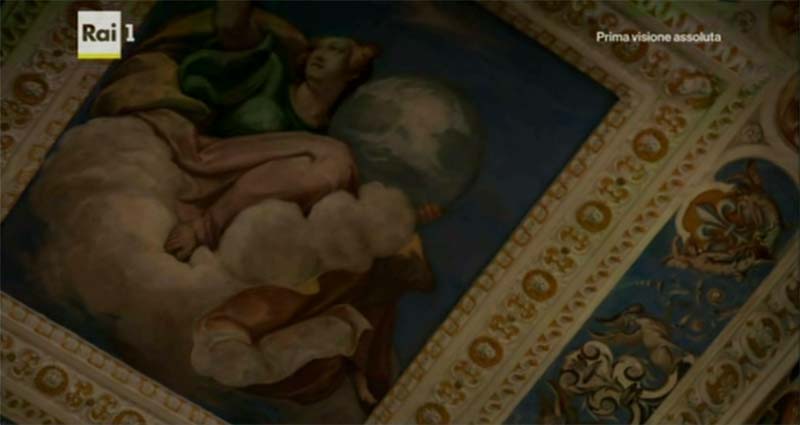 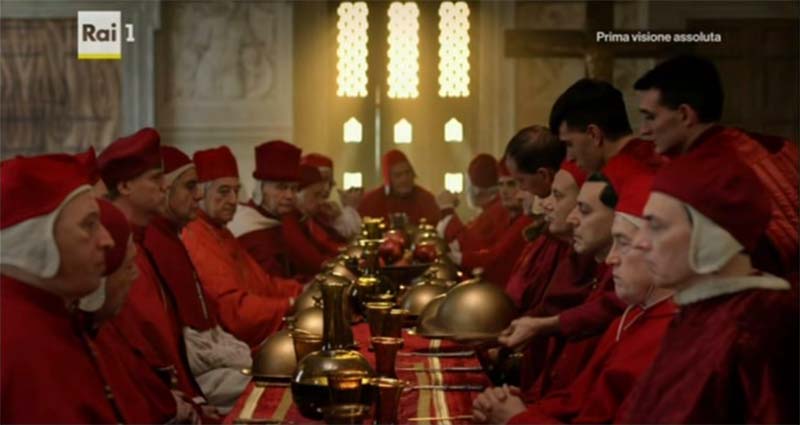 The Sala di Ercole takes name from the Hercules frescoes: the legend says that when Hercules drew the club from the soil, a water spring appeared, which feed the Lake Vico. Federico Zuccari and Jacopo Zanguidi are the artists.

The fountain of Sleeping Love, made by Giovan Battista (as sculptor) and Curzio Maccarone (as plumber) and the large windows are characteristic elements of the hall. 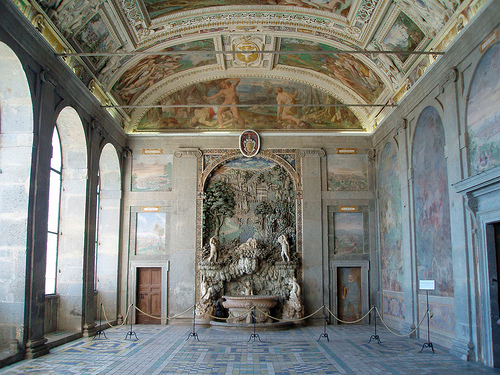 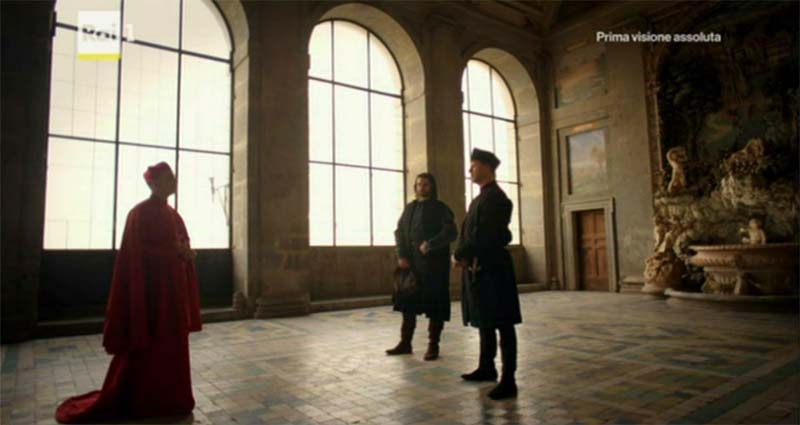 The circular plan internal courtyard was an idea of the architect Antonio da Sangallo the Younger, but Barozzi completed it.

The loggia which extends along the perimeter is the set for the episode where Cosimo, Lorenzo and Cardinal Cossa meet Cardinal Orsini, and Cosimo discovers about Bartolo.

Later it’ìs a path along the route of the Cardinals procession which guides them to the Sala dei Fasti Farnesiani, to celebrate the Conclave. 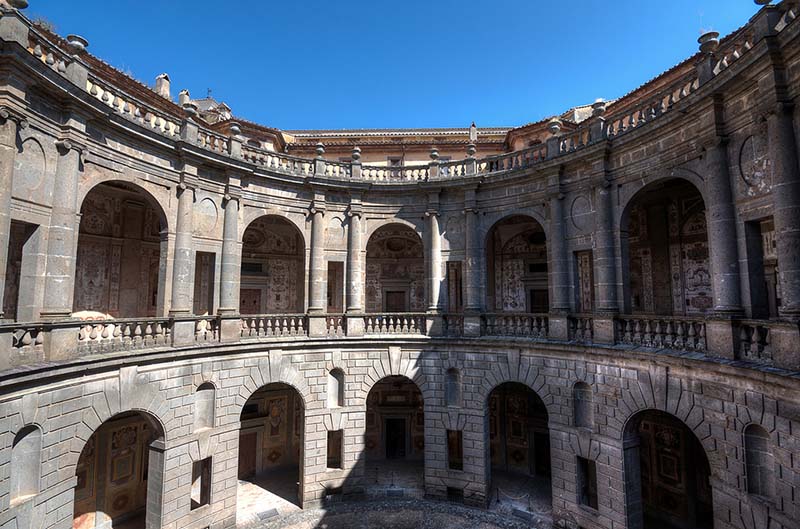 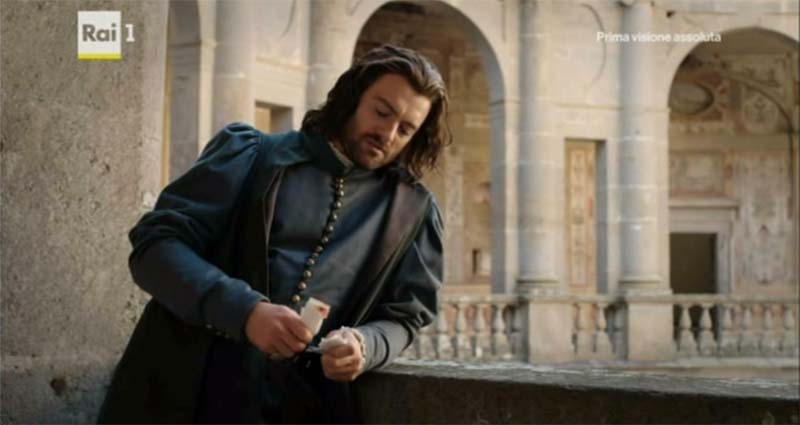 Gardens and the Casina della Caccia

In the high gardens is set the episode where Lorenzo meet Pope Martinus V to ask him to contribute to peace between Lucca and Milan. In the scene we see Lorenzo riding near the Fontana del giglio, getting off the horse, climbing the stairway that links the high gardens to the Casina della Caccia, and meeting the Pope. 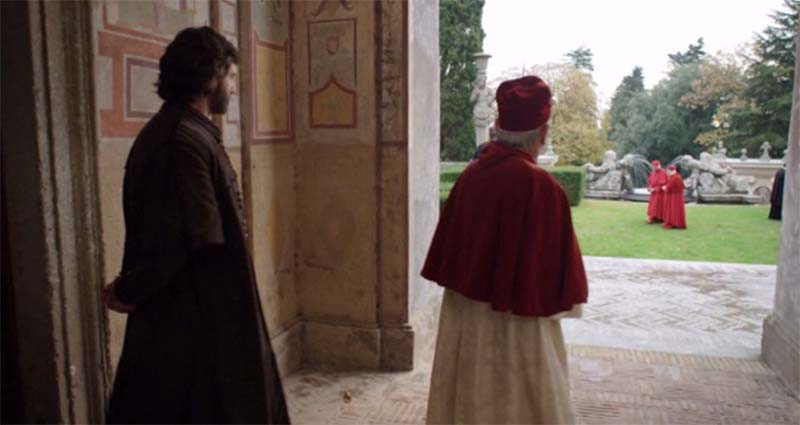 In the episode 1×03 the plague strikes Florence: that makes Cosimo and his family to flee to his country villa: the Tenuta di Montelupo.

The scene is set in Casina della Caccia (aka Casina del Piacere). 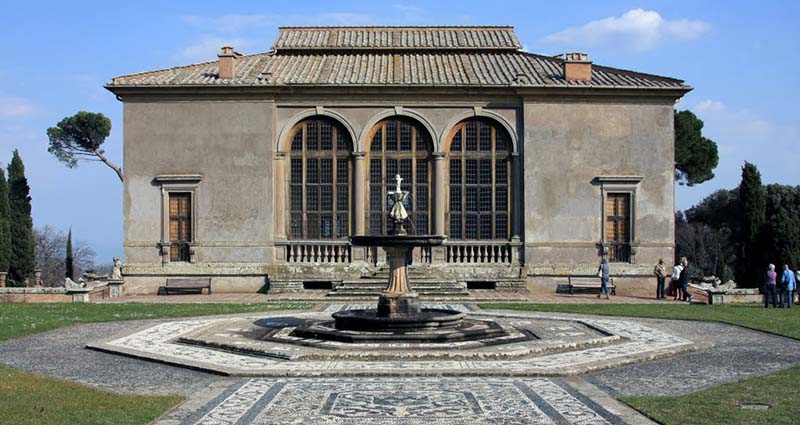 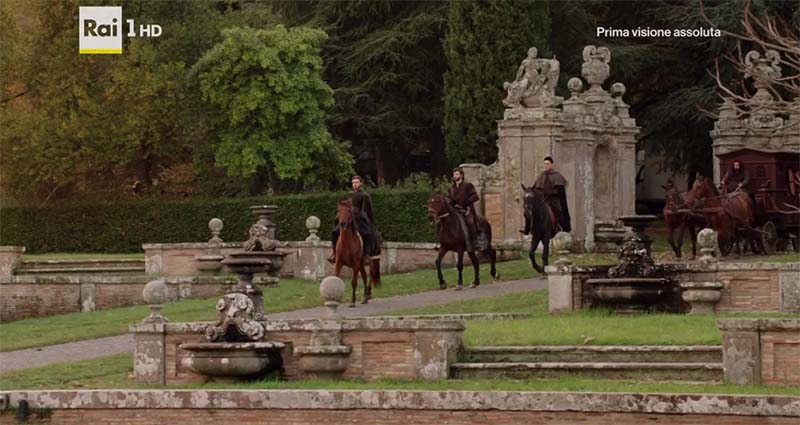 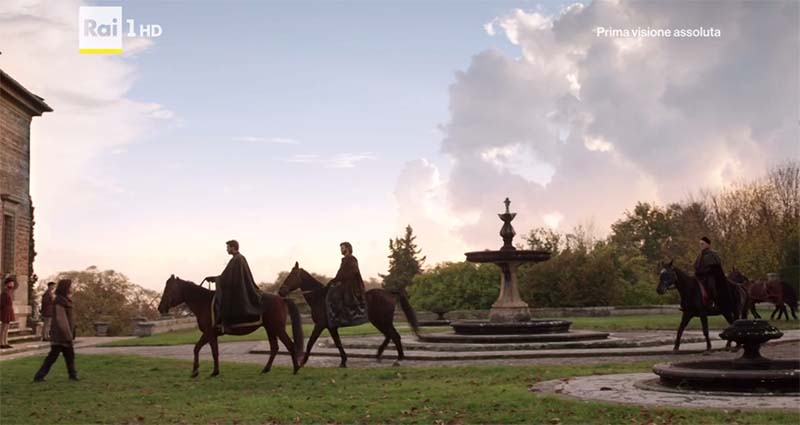 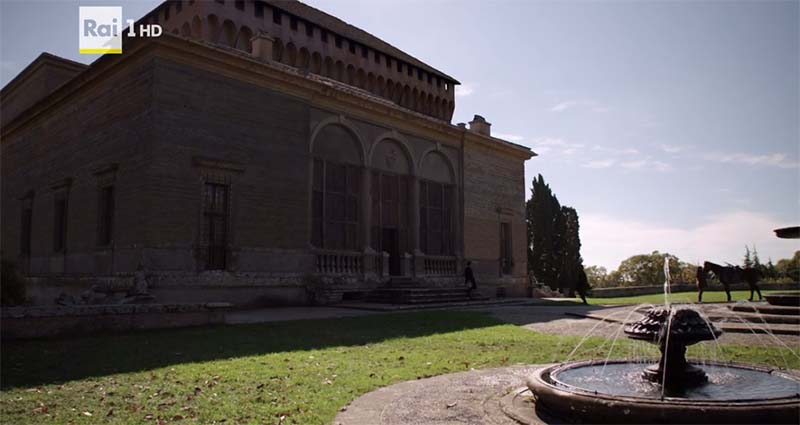 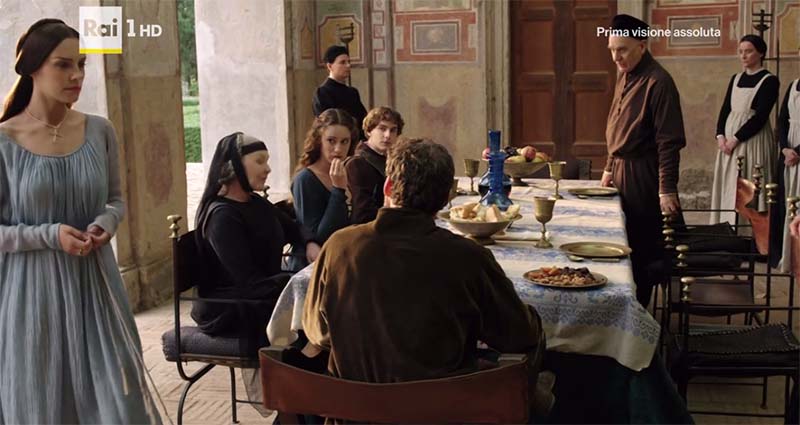 How to visit Villa Farnese

Villa Farnese is a State property and is open to the public all year round.

How to visit all the tv series’ locations in Lazio

The Medici Masters of Florence’s locations in Lazio are all close to each other and most of them are open to the public: that makes easy to visit them all. The best place to start is Bracciano, where the main location is, and which is in the middle.

The best accomodation to stay in Bracciano and to visit the Medici’s locations is La Gismonda agriturismo, where you’ll find all the info about the locations, and how to visit them all. 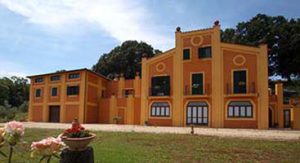 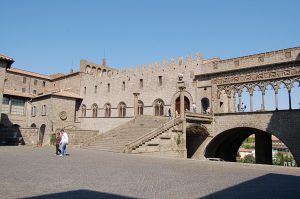 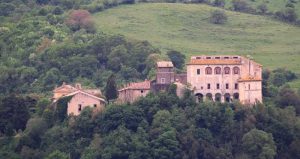 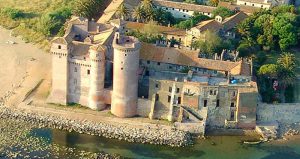 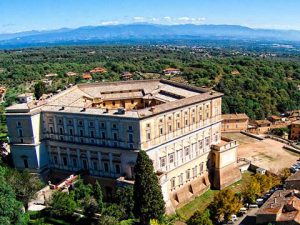 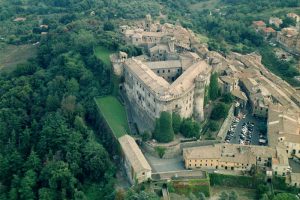